Quite a while back, the UGC has added a new aspect to their website: an online portal for logging complaints against ragging. This is quite a step forward by the UGC and very different to the usual staunch denial our country has about these (and many other) issues. However, in the long run, will it make a difference?

The portal was given all the publicity range of a teaspoon

You would think that something as groundbreaking as this would receive a lot of media attention and public interest, right? But apparently not so. Aside from a few people who are spreading the news through their personal social media profiles, there seems to be no evidence of any publicity the portal has received.  In fact, the reference we found to the portal was on a reply thread to a tweet discussing ragging.

However, the portal has been online since January 2017! It’s just that no one knew about it. Not what you’d expect from literally the first place to openly accept ragging complaints.

The UGC itself admits that over 2000 students drop out of government universities per year to escape these harmful situations. And while their effort to curb that is commendable, we do wonder why this hasn’t been publicized more.

Ragging has not been acknowledged or dealt with in Sri Lanka for decades. The whispers suggest that these perpetrators have strong backing by various people. Many fear bringing this topic up even in casual conversation. One of the heaviest taboos in the country. And there’s a portal that accepts complaints. What’s the first thing you check for? Anonymity.

The UGC makes the very obvious mistake of making the complainer’s name, phone number and NIC number mandatory. While we understand the concern of making sure each complaint is verified, this is not how you make a victim feel safe reporting the atrocities that are being committed against them.

Is security even a thing? 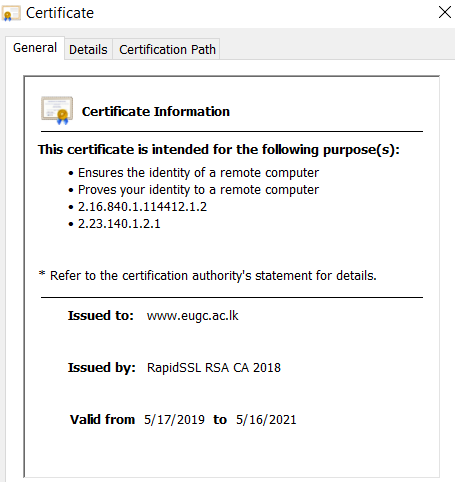 To our relief, the security seemed to be okay, from what we could see. The certificate is valid and the site assures us that any information being sent through the site will be private. However, we can unfortunately give no reassurance on the UGC databases or access from that end.

Perhaps that is why, from the 800+ complains that have reportedly been sent, most involve dummy values for the mandatory fields. It hampers the already self crippled limb of the UGC, but for most victims, it is not a risk they will not take.

Recently Darsha Udayanga from the University of Ruhuna came forward, and he revealed that after he had complained to the UGC office, he had to endure worse and worse ragging situations. In these kind of circumstances, how do we expect victims to come and merrily enter their personal details on a site?

How are these complaints being handled?

Professor Uma Coomaraswamy, the director of this project on behalf of the UGC, stated that all these complaints are first routed to a central database, sorted by university, and then sent to the respective vice chancellors, and followed up via phone call. She mentioned that they expect a report every 3 to 6 months on what actions have been taken against these complaints.

The UGC is aware, she says, that since ragging is a violation of constitutional human rights, that they can intervene without having to go through university administration. However, they choose not to do so as they are working with each university’s vice chancellor. Professor Uma admits that this will probably not stop the ‘sadistic hardcore raggers’, but act as a deterrant for ‘the mediocre raggers’ instead.

In addition, she also stated that in the event that a student refuses to go back to the same university as they were when they were subjected to ragging, then they would coordinate with the admissions department and see whether a transfer to another university was possible.

“It’s a tragedy”, professor Uma says, speaking about how many students drop out of university, squandering the chance that they have been given at a free education and dashing their families hopes.

It’s a shame that they don’t see the real tragedy as it is.